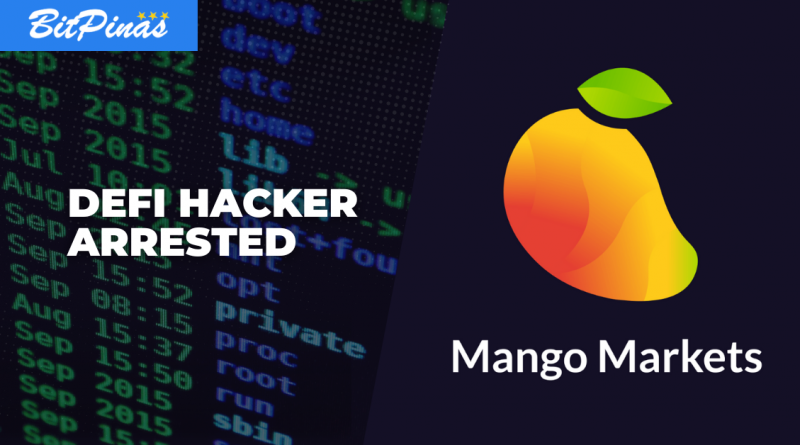 DeFi Protocol Mango Markets Manipulator Avraham Eisenberg was arrested last Monday in Puerto Rico, according to a previously sealed complaint, charging him with fraud and market manipulation, filed with the Southern District of New York.

Eisenberg was the first person to be arrested by the US authorities for manipulating a decentralized finance (DeFi) trading platform.

In October, he used his “highly profitable trading strategy” to manipulate Mango Markets draining its treasury.

In his scheme, Eisenberg utilized two accounts and created an artificial inflation within the platform. He sold a large number of perpetual contracts of Mango’s crypto token MNGO from one of his accounts to the other which made the price increase by 1,300 percent in under an hour. After that, Eisenberg used the now-high-priced token as collateral to have a massive loan from Mango Markets $110 million in other cryptocurrencies and then quickly withdrew the funds.

According to a deposition signed by FBI Special Agent Brandon Racz,  he “willfully and knowingly” engaged in the scheme.

“Eisenberg engaged in a scheme involving the intentional and artificial manipulation of the price of perpetual futures contracts on a cryptocurrency exchange called Mango Markets, and other manipulative and deceptive devices and contrivances,” the deposition read.

Moreover, Racz also noted that Eisenberg may also know his actions were illegal for the day after the exploit, he flew from the United States to Israel.

“Based on the timing of the flight, the travel appears to have been an effort to avoid apprehension by law enforcement in the immediate aftermath of the Market Manipulation Scheme,” he said.

Just a few days after the manipulation, he admitted to his involvement in draining the DeFi protocol, however he defended it stating that his actions are “legal” in the open markets.

“I believe all of our actions were legal open market actions, using the protocol as designed, even if the development team did not fully anticipate all the consequences of setting parameters the way they are,” he tweeted.

In the same thread, he also admitted that his actions made the platform insolvent, leading to customers being unable to use their funds, thus he tried to negotiate a settlement with Mango Markets and agreed to return $67 million to the decentralized autonomous organization (DAO) to repay the bad debt within the protocol.

The returned assets were used to refund the users impacted by Eisenberg’s attack.

A month after succeeding in Mango Markets, Eisenberg tried his luck again on another DeFi protocol, Aave, where he tried to take out a loan of 40 million CRV tokens. However, he failed as the price increased during the attack, instead of dropping due to short sales, which led him to have losses due to the significant short position.

This article is published on BitPinas: Exploiter Of $110m Defi Project Arrested In Puerto Rico