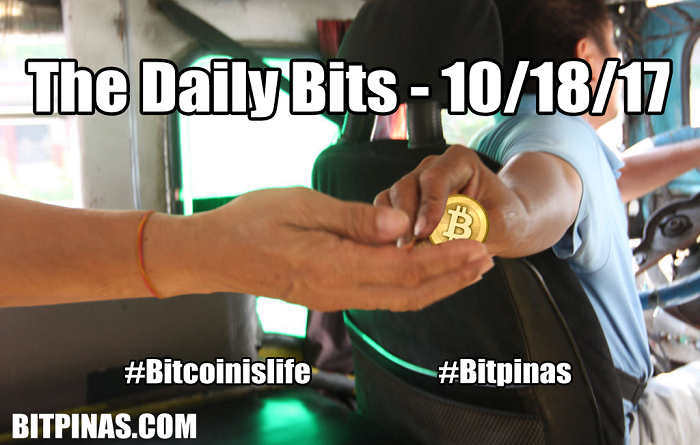 Welcome to the 3rd edition of Daily Bits – Bitcoin and Cryptocurrency News 10/18/2017. In this article, we will be posting relevant news and happenings about the current state of Bitcoin and Cryptocurrency in the country and abroad. Are there new shops accepting bitcoin in the Philippines? Any announcements from BTC sites in the Philippines? What’s happening elsewhere?

Data from the website Cryptocompare, as reported by Bitcoin.com suggests that JPY, USD, and KRW now account for over 90% of BTC traded on Bitcoin Exchanges.

This is now the new trend after the Chinese government began a crackdown of BTC and Cryptocurrency exchanges in China. This is a welcome news in the world of Bitcoin. It is worth noting that Japan, the US, and many such countries have taken a positive stance on cryptocurrency.

With Bitcoin trade skyrocketing in the country, South Korea will soon tax Cryptocurrency Usage. Korea is planning this as they see the value of virtual money growing beyond the Kosdaq (Korean Stock Exchange), shifting away from conventional reservations.

This is not the first time that the SK government discussed cryptocurrency. The Bitcoin Regulation Act was submitted last August 2017, and the regulators came up with measures to regulate cryptcoins this September 2017.

The terminally ill man who borrowed $300,000 to invest in Bitcoins is now a Millionaire

Stories of people getting rich by holding onto their coins are not few. This latest story began in May 2017 when a terminally ill Redditor posted that he borrowed $300,000 to invest in Bitcoins. With that amount, he was able to get 191.118 BTC.  At that time, here’s what he had to say:

If bitcoin reaches the 10k mark, which I see as a distinct possibility, or I would not have taken such a risk – I plan on moving to the west coast and getting away from all the angry people here where I currently reside.

According to Bloomberg Analyst Edward Robinson:

I think Wall Street may actually be responsible for driving the price, because it’s with every announcement that Wall Street is thinking of embracing Bitcoin as a new asset class that we start to see this surge.

Forecast: Bitcoin is a Speculative Venture

The former head of the Federal Reserve thinks bitcoin is a mere bubble.

Bitcoin is an attempt to replace fiat currency and evade regulation and government intervention. I don’t think that’s going to be a success.

He does think that the blockchain technology holds promise for global banking systems.

The Fed, the Bank of England, and Japan are very supportive of these technologies because they’ll improve payment systems.

Below is the Bitcoin to Php chart today. It’s a daily chart. The chart below the big one is the 5-year Btc – Php chart to better check how far BTC’s value has increased in Pesos in the last 5 years

Bitcoin and the Regulators

BSP deputy director Melchor Plabasan and Satoshi Citadel Co-Founder Miguel Cuneta appeared in ANC’s “On The Money” Program to discuss the growing usage of Bitcoin in the country. Satoshi Citadel is the company behind Bitcoin Services such as Buybitcoin.ph and Bitbit.cash. You can watch the video here.

Plabasan even mentioned how Bitcoin transactions in the Philippines had increased, from PHP 3 Million in 2014 to PHP 6 Million in 2017.

That’s it for today’s Daily Bits – Bitcoin and Cryptocurrency News 10/18/2017. Check back again tomorrow for another post in this series!

[…] legal recognition in Japan, bitcoin use has surged in the East Asian country. Other countries such as Korea, the Philippines, […]