Following the tweet of the official twitter account of Ukraine seeking donation in cryptocurrency after Russian attacks, the country and NGOs providing support to the military have successfully raised $22.8 million in crypto since February 26th—according to research firm Elliptic.

The tweet raised suspicions as the crypto wallets were mostly anonymous and, to non-crypto natives, came across as a scheme for profit.  Fortunately, the tweet remained published and even retweeted by several Ukrainian personalities, confirming the movement’s genuinity.

Moreover, a spokesperson from Ukraine’s ministry of digital transformation also confirmed to Techcrunch that the wallet address is authentic and the accounts are state-owned.

Tomicah Tillemann, the Global Head of Policy for an arm of venture capital firm Andreessen Horowitz, also confirmed the authenticity of the addresses. He also expressed his support for the country’s fight against Russia.

To date, several Decentralized autonomous organizations (DAOs) have formed to support Ukraine and numerous NFTs have been sold to raise money for the Ukrainian people and its military. In fact, there was one NFT donated that was valued at approximately $300.

According to Etherscan, the Ethereum wallet of Ukraine already received around 7,200 transactions which totals to more than $620,000 as of writing. Likewise, Bitcoin wallet address have been recorded to have more than 7,700 transactions and received a total of 164.13108272 BTC (approximately $7,000,000).

Consequently, to aid the outgoing transactions of the country, large amounts of ETH were transferred to Kuna, a cryptocurrency exchange based in Kyiv, acting as a technical support for the Ukrainian fundraise.

“All funds are safe and are being directed for the government’s needs as requested.” – Kuna

Further, Come Back Alive—a Ukrainian NGO which supports the military—also received several million dollars in crypto donations according to the previous Elliptic research. Another NFT collection also appealed for donations in crypto assets.

Aside from actual donations, personalities from the crypto community also expressed their support for Ukraine.

In a tweet, Vitalik Buterin, the creator of Ethereum, expressed his distress and called the attack “a crime” against Ukrainian and Russian people.

Sam Bankman-Fried, CEO of cryptocurrency exchange FTX, also announced in a tweet that the company donated $25 to every Ukrainian on their platform.

“Do what you gotta do.” – Sam Bankman-Fried

This article is published on BitPinas: Ukrainians Raise Funds Through Crypto 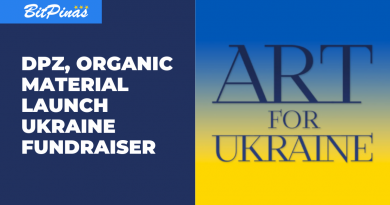