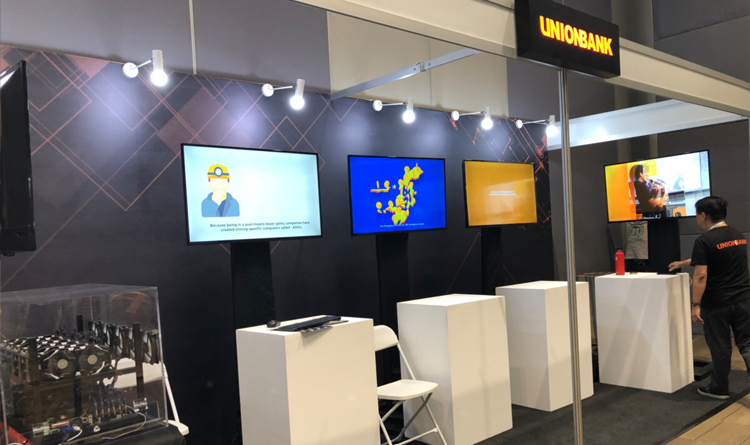 During the Blockchain Applications and Economics Forum (Blockchain Asia Forum) 2018, Union Bank had a large booth at the exhibition hall that showcases its commitment to spreading blockchain awareness in the country – a working mining rig.

The mining rig consists of 6 Nvidia consumer grade hardware that the public can buy on local computer stores. The rig uses Nice Hash. Nice Hash determines which algorithm is the fastest and the most profitable. Even though it can mine different coins, its payout is always in bitcoin.

When asked about the bank’s plan with these mining rigs, Mr. Louis Concepcion, senior programmer, and Mr. Marco Romero, business process automation engineer at Union Bank, said this hardware is for experimentation purposes and to gather information about how they work.

The blockchain is being experimented and utilized extensively over at Union Bank. The i2i project is one such initiative to use the blockchain to connect rural banks, and therefore, the unbanked, into the country’s main financial network.

Mr. Concepcion also shared that the bank is currently looking at putting into the blockchain all its general policies documents. This will allow the bank to keep track of any improvements to the policy records and also track its views. For example, the blockchain can pinpoint exactly when a policy is created or improved upon. If the Central Bank inquires about a certain policy, the bank has an immutable record on when exactly the policy has taken effect.

Union Bank is a key member of the Blockchain Association of the Philippines, an initiative to spread blockchain awareness in the country. The bank’s chairman, Mr. Justo Ortiz, is the association’s president.
Share some Bitpinas love:
Follow on social and subscribe to our newsletter
4 Comments
Oldest
Newest Most Voted
Inline Feedbacks
View all comments

[…] Here you will find 24267 additional Information on that Topic: bitpinas.com/news/union-bank-brings-mining-rig-blockchain-asia-economics-forum-2018-2/ […]

[…] Info on that Topic: bitpinas.com/news/union-bank-brings-mining-rig-blockchain-asia-economics-forum-2018-2/ […]

[…] There you will find 70456 more Info to that Topic: bitpinas.com/news/union-bank-brings-mining-rig-blockchain-asia-economics-forum-2018-2/ […]

Union Bank assured its employees and the public that jobs will not be lost in its adoption of blockchain and artificial intelligence within its system.

iPhone and iPad users who are infected with crypto mining malware may notice a significant decrease in their battery life along with a massive CPU drain.

Union Bank will be part of an expanded network that facilitates cross-border payments across the major markets including North America and Europe.