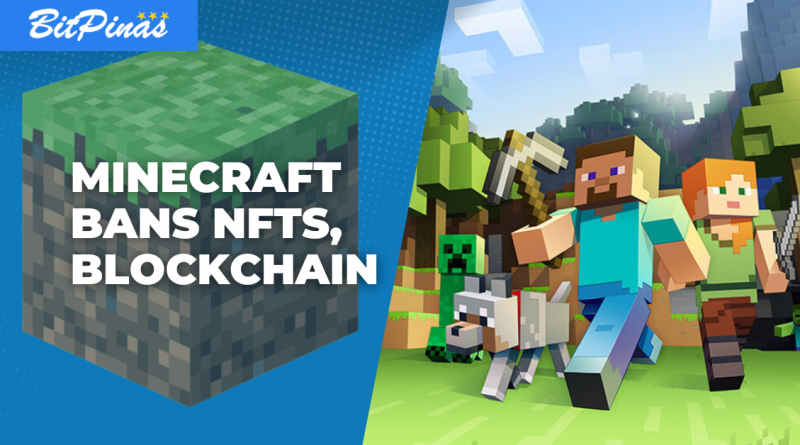 While big companies, including game developers, are venturing into the growing non-fungible token (NFT) space, Mojang Studios, the developer of the widely-played world-building game Minecraft, said that there is no space in their game for Blockchain technologies and NFTs. For their reasons, the developers cited numerous concerns regarding the technology such as security issues and fraud.

“To ensure that Minecraft players have a safe and inclusive experience, blockchain technologies are not permitted to be integrated inside our client and server applications, nor may Minecraft in-game content such as worlds, skins, persona items, or other mods, be utilized by blockchain technology to create a scarce digital asset.” -Mojang

In a blog on the official Minecraft website, Mojang detailed why they won’t allow the technology into their game.

“In our Minecraft Usage Guidelines, we outline how a server owner can charge for access, and that all players should have access to the same functionality. We have these rules to ensure that Minecraft remains a community where everyone has access to the same content. NFTs, however, can create models of scarcity and exclusion that conflict with our Guidelines and the spirit of Minecraft,” they stated.

Further, the developers also expressed their concern over some third-party NFTs which “may not be reliable and may end up costing players who buy them.” They noted that some third-party NFT implementations are also entirely dependent on blockchain technology and may require an asset manager who might disappear without notice. They also emphasized that there are instances where NFTs were sold at artificially or fraudulently inflated prices.

However, they still assured that they will be “paying close attention to how blockchain technology evolves over time to ensure that the above principles are withheld and determine whether it will allow for more secure experiences or other practical and inclusive applications in gaming. However, we have no plans of implementing blockchain technology into Minecraft right now.”

Recently, the attempt of web3 company Polium of releasing the “world’s first multi-chain console for web3 Gaming” via its Polium One is shunned by the traditional gaming community and branded their innovation as just a bold and ambitious claim. (Read more: Online Game Publications Cringe on Upcoming Web3 Console)

Fans of “Ni no Kuni: Cross Worlds,” a sequel to the popular role-playing game (RPG) Ni No Kuni, were also not pleased when the game tried to venture into NFTs and included play-to-earn mechanics into its gameplay. And like Polium, the game also received multiple backlash although it also received adoration from players. (Read more: Ni No Kuni NFT and Crypto Features Enrage Fans)

This article is published on BitPinas: Minecraft Bans NFT and Blockchain