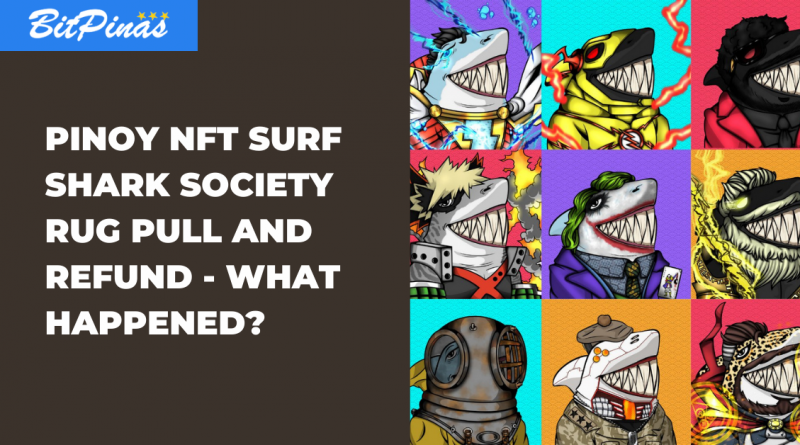 Last March 3, 2022, Kenri Ang, founder of the Filipino NFT project Surf Shark Society informed the members of their Discord server that their outsourced developer, which goes by the name of Randy Santago, did a “rug pull” – the act of abandoning a project and running away with the money. More than ₱11 million was taken away according to estimates of BitPinas sources.

What is Surf Shark Society?

The Background: Surf Shark is a highly publicized project being touted as the next big thing in the Filipino NFT scene. Prior to the events of March 3, marketing and promotions for Surf Shark Society (SSS) are very visible across social media channels, including Facebook, Twitter, and Tiktok.

Who are the Surf Shark Society Partners?

Some of its partners include many big name companies and social media influencers listed in this tweet:

What happened on March 3?

Minting time for the Sharks started at around 8pm.

By 9:40 pm, keen eyed members of their community noticed some anomaly in the blockchain address of Surf Shark, notably the SOL (Solana) from the public mint treasury was being drained then converted to USDT and then transferred out.

By 10:07 pm, Kenri Ang informed the community that their developer “rugged them” and that they are doing steps, using their own personal funds, to save the project, which, at the point, was still set to continue.

The confusion that followed

While there are many red flags that any investors should keep an eye on when investing in NFT projects, the Surf Shark Team appeared to tick off many check marks in “NFT Green Flags List”. Notably, the team is doxxed, everyone in the community knows who they are. Kenri Ang was even featured in a newspaper article as the teen who found success in stock trading.

As mentioned, Surf Shark also has a lot of partnerships:

Which led the community members to ask how such a project with a number of high-level partnerships would get rugged.

Immediately after the rugpull announcement, many members of the community jumped to a Twitter Space to discuss the situation. It is clear that:

Kenri Ang mentioned on Discord at 10:39 pm that they have onboarded new developers to help them de-rug. More interestingly, they were planning on launching a new NFT collection that will be airdropped to people who minted the old Surf Shark collection.

And this led to an epic rant in the Twitter Spaces.

(Translaton: How can they de-rug? Don’t tell me they are asking you to mint again? Will anyone still buy those? You’re not stupid, right?”)

Around 11:56, “Cassava” of Surf Shark affirmed that the founders are still around and will not abandon the project. After apologizing, Cassava said they will process the refunds later.

The account name of the blockchain developer is Randy Santiago:

Kenri and the Surf Shark team was asked how and why they trusted “Randy Santiago” to handle what could be the most important part of the project, to which they replied that they worked with Randy before.

The entire incident led to memes about Randy Santiago, who is a popular singer and artist in the Philippines. One group even minted “Kool Randy.”

On March 4, 2022, another Twitter Space was organized but this time, with Kenri and the Surf Shark team also participating.

Kenri vowed to give refunds to everyone holding a Surf Shark NFT. Surf Shark Society will also stop its activities and Kenri also said he’ll stop being involved in the crypto scene.

When asked where the funds will come from, Kenri said it will be from their own personal funds.

A confrontation happened between Kenri and Nikuu, the organizer of the Twitter Space, who “hushed” Kenri during one of their conversations, telling him to stop talking while he’s not finished talking. Everyone appeared to be satisfied with the resolution of “refund” so the Twitter Space ended with a tangible result that appeased both parties.

(Prior to this, another Twitter Space, organized by popular content creator Extra Rai, discussed the Surf Shark Rug Pull and talked to people who minted or were part of the project.)

Kenri asked those who received the refund to not list the Surf Shark NFT on the marketplaces because that would just give royalties to the “developer who rugged us all,” he stated.

The refunding is set to continue this week.