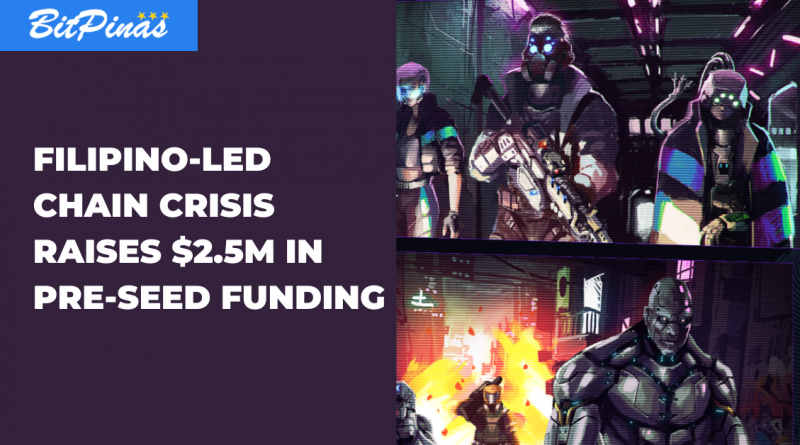 A Solana-based, blockchain P2PAE (pay-to-play-and-earn) called Chain Crisis has successfully raised $2.5 million in a pre-seed funding round. The acquired fund will boost the development of the MMORPG  towards its release schedule for Q4 2022.

The round was led by Solar Eco Fund with the participation of Cryptology Asset Group, Genblock Capital, Solanium Ventures, Evernew Capital, and other investors.

“We are very happy to be backing James and his team in building Chain Crisis. The era of boring play-to-earn games is coming to an end, and Chain Crisis is well positioned to become the #1 MMORPG in Solana,” Solar Eco Fund stated.

James Florentino, Chain Crisis’ Founder & CEO, stated that in his 11 years in the crypto space, he always dreamed of doing an on-chain MMORPG that “brings players together, defeating enemies and earning money cooperatively while enjoying full decentralized ownership of items.”

“When I decided to learn Solana as a dev, I saw the feasibility of implementing the type of MMORPG I have in mind which led to Chain Crisis. Having met Solar Eco Fund and Cryptology AG, they immediately understood what I was trying to do.Now together with our global partners, we are confident that the development and growth of Chain Crisis will be trailblazing at full speed,” Florentino added.

Solanium Ventures, one of the investors, expressed their excitement for the game and stated that they “can’t wait to walk around in Warpgate City.”

“We are excited to be backing Chain Crisis as our new partner. The team has years of technical and creative experience in the crypto space, and we can’t wait to see the best MMORPG game on Solana unravel before us. See you all in Warpgate City,” investor Evernew Capital said in a statement.

Chain Crisis is inspired by a high-tech, dystopian, and not-so-distant future where society is fighting against corporate control. It is set in the year 2088 in Warpgate City, a sprawling metropolis governed by corrupt megacorps. Players can choose from 3 different Life Origins where they are able to live out different paths. With no predefined roles and classes to choose from, players are given the freedom to specialize and stand out.

Moreover, contrary to the traditional MMORPGs, being on-chain on the Solana network will grant each player ownership of their in-game assets. Non-fungible token (NFT) skins for their avatars will also be available. Lastly, players will also get rewarded for their time and commitment to the game.

Like Axie Infinity, Chain Crisis will use a two-token model in order for players to be rewarded for playing the game. The first token is the Crisis Euro Dollar Standard (CREDS), which is the in-game currency. Players can earn CREDS by completing missions and gigs with their friends. CREDS can be used to customize each player’s character to make them more powerful, more stylish, and to purchase equipment in the open marketplace of the game, the Black Market. The second one is a governance token called WRPG that will allow holders to vote on certain economic parameters of the game such as taxes, and even the mission and gig fees in place.

I’m glad that I knew about darkwebcyberhackers @ gmail . com on time. With their advanced logs coupled with their expertise in wire transfers, they credited my account with $500,000. They also helped me to recover my crypto wallet which i forgot the password to..

I’m glad that I knew about darkwebcyberhackers @ gmail . com on time. With their advanced logs coupled with their expertise in wire transfers, they credited my account with $500,000. They also helped me to recover my crypto wallet which i forgot the password to.,..
Text & Call or What’sApp: +18033921735