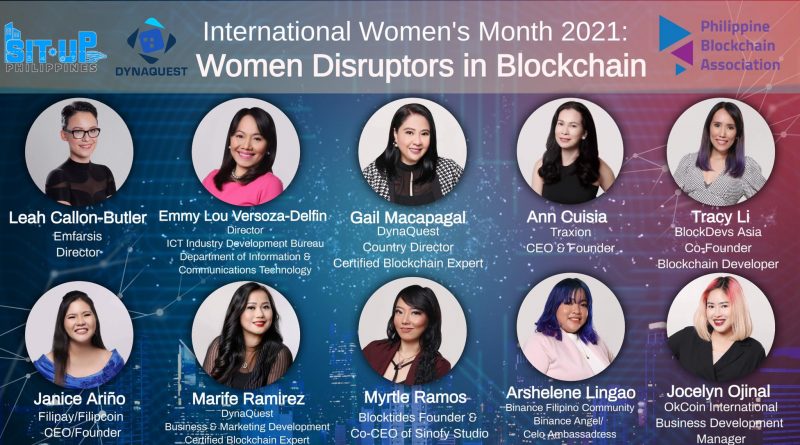 An individual may only accomplish so much, but as a collective, the world-changing effect is multiplied by several folds. Today, we highlight the 10 Women Disruptors in Blockchain from the Philippines. We will highlight their journey to Blockchain and the accomplishments they made along the way. They are innovators and pioneers in their own right; dispelling stereotypes, changing the norms and inspiring other women to make their way into Blockchain and contribute to the technology’s innovation that has a potential to transform the country’s business, commerce and governance as we make our way into the 2020s decade.

The 10 Women Disruptors in Blockchain from the Philippines

Ann’s achievements include Traxion being recognized in Asia-Pacific as a reputed systems integration of Blockchain, and in 2019, Ann was named among the BitPinas 2019 Blockchain Women Influencers in the Philippines, as well as being named among the 2020 Empowered Women of Blockchain. Early in 2020 Ann, her company Traxion, alongside key partners have launched, Kadena Hub, a Blockchain accelerator hub for startups in the Philippines, which is a first of its kind. Kadena Hub was recognized by the government as a game changer when it comes to emerging technologies.

Emmy is currently working on introducing an information and learning campaign about Blockchain in a couple of upcoming webinars as a way to fast-track the knowledge of local government personnel and local leaders about Blockchain. This initiative will help push the envelope in Blockchain initiatives in the Philippines.

Leah is recognized by BitPinas as among the 2019 Blockchain Women Influencers in the Philippines. Leah and her company, Emfarsis, was cited by the government in launching the project: Careers in STEM, in which the programs focuses on developing the next generation of technical skills on STEM and emerging technologies in preparation for the coming fourth industrial revolution. Leah is a featured columnist on CoinDesk and her works are cited by numerous Blockchain organizations and the influential figures of. Last year, Leah was also selected as a judge 2020 AFI Inclusive FinTech Showcase.

In working for DynaQuest, Marife “Faye” notes that the company’s culture makes it a point to get everyone involved in the marketing, business and repositions of DynaQuest in the emerging markets across frontier technologies. It includes new dynamic goals that Faye sets her sights on, in taking DynaQuest to new markets where growth opportunities are plentiful. In organizing the company’s events, forums and networking activities, Faye was a part of the company’s major milestones as it was recognized globally by Blockchain’s largest virtual enterprise awards: Enterprise Blockchain Leadership “2020 Blockchain Revolution Global Award Finalist”.

Tracy is the co-founder of BlockDevs Asia. She is a seasoned enterprise software developer in which her roles include engineering, information architecture and strategic deployment. To date, Blockdevs Asia’s biggest achievement was winning the 2019 Klaytn Hackathon in Korea. Tracy and her team created a Blockchain-based educational platform and was later presented to a larger audience, where the team’s use case was cited for its innovative capabilities.

Myrtle is a rising superstar in Blockchain and Cryptocurrency as she has organized forums, expos and showcase events globally from Asia, to the Pacific and to the Middle-East. She credits hard work, patience and hectic hours spent in leaving no stones unturned in coordinating with global partners in staging Asia’s largest Blockchain and Crypturrency events. Myrtle’s accomplishments to date are as follows: Award-Winning PR Firm of 2020 by PitchDeck Asia,  Official partnership with Draper Goren Holm,  Membership on the Global Advisory Board at EC-Council Global Advisory Board, Myrtle being a Global Ambassador at WomenTech Network.

Through dedication and diligence, Janice cites on of her achievements on gathering in great detail the informational structure of a Blockchain, which is a vital information in helping demystify Blockchain’s infrastructure – for clarity and to be better understood by developers, customers (private and public sectors), and its users. Under the Transportation Industry, Janice and her team developed FILIPAY and FILIPCOIN,  that is a proven and tested technology-based on the Blockchain. They soon will launch the technology to be used by the public that will help systematize the transaction and process flow of fleets for security and transparency.

Arshelene is a certified Binance Angel. As a part of Binance Angel’s Program, her biggest contribution to the Binance community is her rapport on scaling knowledgebase into the evolving customer experience and her cited community service to Binance where she goes the extra mile in delivering solutions to customer service, customer care and client retention programs.

Jocelyn is one of Celo’s PH Ambassador. CELO has just been listed at Coexstar, a regulated exchange here in the Philippines. One of her celebrated milestones include the Valora App, that has hit over 100K download (and counting). Jocelyn is also one of the moderators of ACDX, a derivative exchange that exclusively offers BBS tokens making it easier for traders to do leverage trading.

Blockchain, as an industry, is a transformative platform that will change how we do business and how we communicate with information. While consortia and their respective macro projects have pushed Blockchain to the mainstream, the industry is vast, wide-open and has plenty of room to welcome the next generation of leaders, pioneers and thought-stewards who will change the world across community, lifestyles and sustainable development framework.

The 10 Women Disruptors in Blockchain are all innovators and leaders on their own right as their contributions are enabling Blockchain locally and it is also showcasing the Philippines’ capability to stage world-changing solutions across industry verticals. As the industry matures into the next big thing in frontier technologies that will redefine business and information processes in the 2020s decade, these innovative women in Blockchain are making their mark this early.

This press release is published on BitPinas: Women in Blockchain: The 10 Women Disruptors in Blockchain from the Philippines 2021