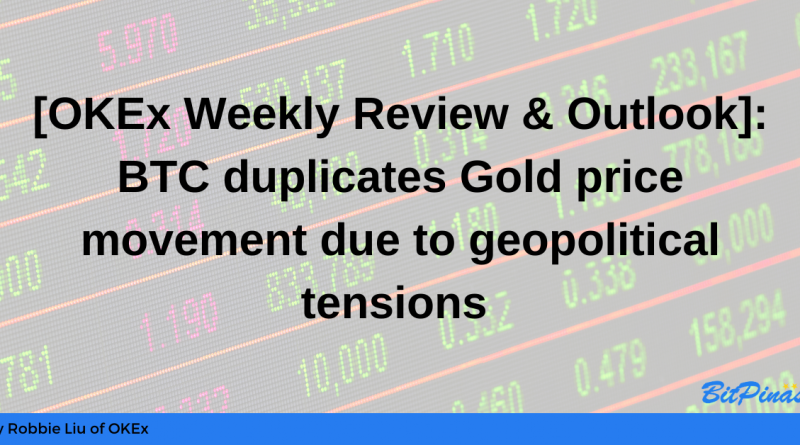 Gold and Bitcoin realized a huge increase in price over the past week due to global instability. Bitcoin jumped to a seven-week high above $8,400 on Wednesday. This is not the first time Bitcoin and gold largely trending in the same direction. In the first half of 2019, global instability caused by the escalation of the Sino-US trade war has driven the rise of “digital gold” in a similar way. During several rounds of trade war negotiation, we have observed the appreciation of gold price with bitcoin. For example, in the evening of September 2nd, 2019, the exchange rate of the US dollar against RMB jumped from 7.175 to 7.195, and gold price rose $5. Bitcoin followed and quickly rose $300.

The correlation of gold and bitcoin broke after September 2019. The two assets’ paths began to diverge in the second half of last year. Bitcoin fell nearly 50% while gold gained another almost 10%.

Increasing tensions in the Middle East are raising questions about bitcoin’s role as a “safe haven” asset again. But the chart below, Bitcoin’s 90-day correlation with GLD (a gold ETF), gives evidence that the correlation is far away from statistical significance. If we expect that bitcoin is a similar safe-haven asset as gold, the two assets would demonstrate a much stronger correlation.

I’m more towards that crypto traders are self-reinforcing their trading sentiment with “gold-narrative”. Many crypto traders were watching the live broadcast of America’s top diplomat’s speech on Iran on Wednesday night HK time. And these traders were discussing placing their bitcoin bets based on gold price candlestick. That’s why we can see these two assets draw an identical pattern during that timeframe. Because traditional investor is still not active in crypto market, whatever rise we have had it may be due to crypto traders buying in a global macro instability anticipation, which is a self-reinforcing move. Using gold price as a bitcoin trading signal is still valid in the short term. Since the escalation of geographic tensions appears to be waning, this signal may disappear soon.

According to OKEx trading data, the “BTC long/short ratio ” shows an interesting trend in the last seven days. This ratio didn’t exhibit an upward trend when bitcoin rose more than 15%, hovering below 1.2. In the evening of January 8th, when bitcoin price failed to break $8500 and pullback (OKEx BTC Quarterly Future price), this ratio started to rise, rising from 1.2 to a recent high 1.4, which indicates many traders were chasing the sentiment and trying to buy the pullback. Moreover, the quarterly future premium basis continued to expand. The basis was only $70 last Friday, and the value has reached nearly $150 today.

The “USDT C2C Premium” shows some strange sentiment. This indicator shows the real-time USDT premium in the OKEx C2C market. The data shows that the current price of the USDT over-the-counter trade is 6.83 yuan, and the real-time exchange rate of the RMB against the US dollar is 6.92 yuan. The USDT negative premium rate continues to climb.

Some reasons behind it. First, China and the United States will sign the first phase of the trade war agreement, which gives the market a yuan appreciation expectation. Second, Chinese Lunar New Year is approaching, and capital escapes from the market.

Bitcoin’s breakout this week also breached its 50 and 100-day moving averages with little resistance. However, short-term momentum indicators have begun to rollover, which is one reason we’re still cautiously optimistic on the sustainability of this latest rally.

As can be seen on the daily chart of the OKEx BTC quarterly future, bitcoin successfully broke the resistance near $ 7770 on January 6th, a head-and-shoulders pattern is technically formed. The price breached 50-day MA but failed to stand above 100-day MA. Price has now fallen below $ 8000 for consolidation. The gold price dropped from $ 1550, and a move towards $ 1540 could put pressure on bitcoin. In the short term, if the $7900 is broken, bitcoin is likely to retest lower shoulder near $ 7750.

[…] Read More on on that Topic: bitpinas.com/price-analysis/okex-weekly-review-outlook-btc-duplicates-gold-price-movement-due-geopolitical-tensions/ […]

[…] Information on that Topic: bitpinas.com/price-analysis/okex-weekly-review-outlook-btc-duplicates-gold-price-movement-due-geopolitical-tensions/ […] 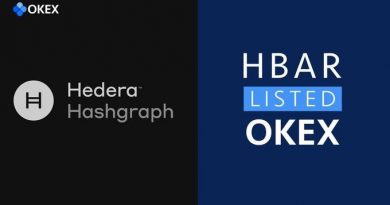 Recently, the global exchange has announced that it is listing Hedera Hashgraph in the spot market on 17th of September 2019, highlighting its impressive ability to choose great projects and the fast development of its spot market offerings. 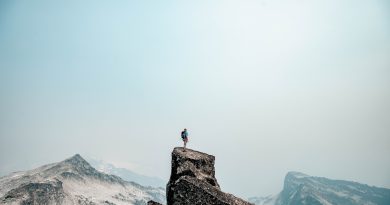 The company continues to perfect its due diligence and assessment models to ensure that is offering the best options to its users. 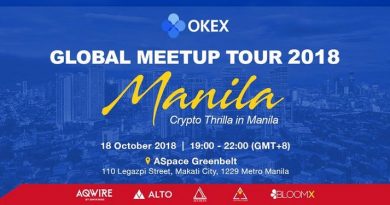 The event will host a number of speakers and will give giveaways to attendees.