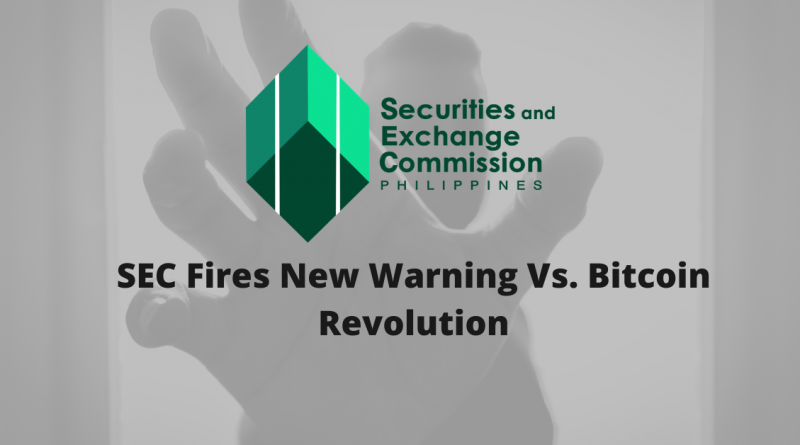 June 18, 2020 – The Securities and Exchange Commission finds out that Bitcoin Revolution continues to solicit investment in the Philippines without the necessary license and/or authority to do so. The Commission advised the public to stop investing in any scheme offered by Bitcoin Revolution.

According to the Commission, Bitcoin Revolution is notorious in using fake celebrity endorsements online, using fake endorsements from the likes of Sen. Manny Pacquiao, Former Sen. Manny Villar, and Boy Abunda to lure Filipinos to invest in the scheme. With unknown operators, Bitcoin Revolution promises a success rate of as high as 99% per transaction.

Bitcoin Revolution claims that a person can earn as much as $1,000 for a minimum investment of $250. It also claims that some of their traders became millionaires in less than 2 months.

SEC reiterates that Bitcoin Revolution’s scheme is relative to the offering and sale of securities in the form of an investment contract. SEC reiterates that such undertaking requires a license from the Commission. Bitcoin Revolution does not have the license to solicit investment, nor does it have a license to operate as a company in the Philippines.

Bitcoin is also not in the list of licensed virtual currency exchanges approved by the Bangko Sentral ng Pilipinas.

SEC reminds the public to be mindful of cryptocurrency’s volatility. “Operations of such unregulated entities engaged in digital asset trading are completely unaccountable,” SEC said in a press release.

Finally, SEC said it will go after unscrupulous individuals and/or entities promoting Bitcoin Revolution for violation of the Securities Regulation Code and the Bayanihan to Heal as One Act.

[…] Here you can find 81112 additional Information on that Topic: bitpinas.com/news/sec-fires-new-warning-vs-bitcoin-revolution/ […]

SEC: Rigen Marketing is not authorized to solicit investments from the public because they don’t have the license to do so.