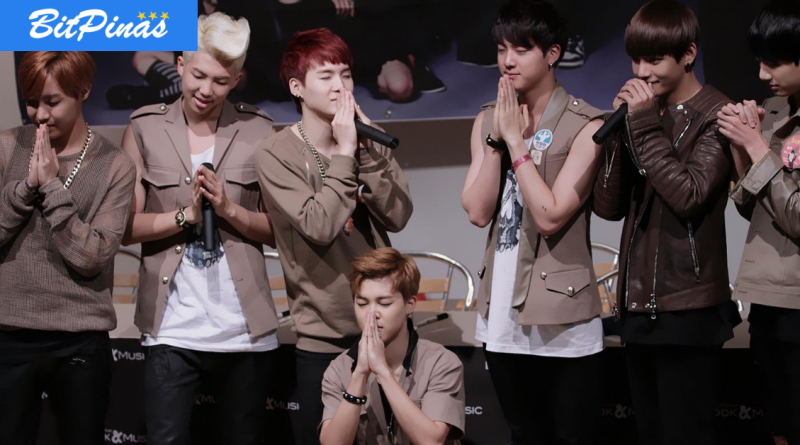 The Hallyu wave is now joining the NFT wave.

Hybe, the powerhouse behind the popular boy band BTS, announced on Thursday, November 4, in a live streamed briefing that it will be launching new pop acts and investing in NFTs as it partnered with South Korea’s top cryptocurrency exchange operator Dunamu to establish a joint venture to explore the non fungible token (NFT) market.

“HYBE and Dunamu plan to develop an NFT business under a new joint venture, which will allow the artist IP-based content and products that HYBE has showcased to date to become digital assets for fans,” said Bang in the English-subtitled announcement.

The company disclosed in the regulatory filings that the partnership includes an agreement involving Hybe buying a 2.5% stake in Dunamu, operator of Upbit crypto exchange, for 500 billion won (more than 21 billion pesos). Separately, Hybe will issue 700 billion won (approximately 29 billion pesos) of new shares to Dunamu which would make it a minority shareholder of Hybe with 5.57 percent ownership.

Moreover, the photo cards of BTS members, which fans buy as collectibles, will now also be released as NFTs on Upbit, and would eventually be available to share and traded on Hybe’s app Weverse.

Hybe founder Bang Si-hyuk stated in an online briefing that their collaboration with Dunamu is a way “to expand the fan experience.”

“We are under talks to shape up a detailed action plan with Dunamu on how to provide secure photo card ownerships and allow fans to possess them permanently. They will enjoy diverse experience by collecting, exchanging and displaying the cards through global fan communities such as Weverse, instead of having a single photo,” Bang said.

Currently, there are only four Korean exchanges, including Upbit with 88% of trading volume, that are allowed to offer won-based trading as well as crypto-to-crypto trading services after a regulatory crypto restriction last September. The other three are Bithumb, Coinone, and Korbit.

This article is published on BitPinas: BTS NFTs Coming Soon Thanks to Agency Collab with Korean Crypto Exchange

[…] This text is revealed on BitPinas: BTS NFTs Coming Soon Thanks to Agency Collab with Korean Crypto Exchange […]