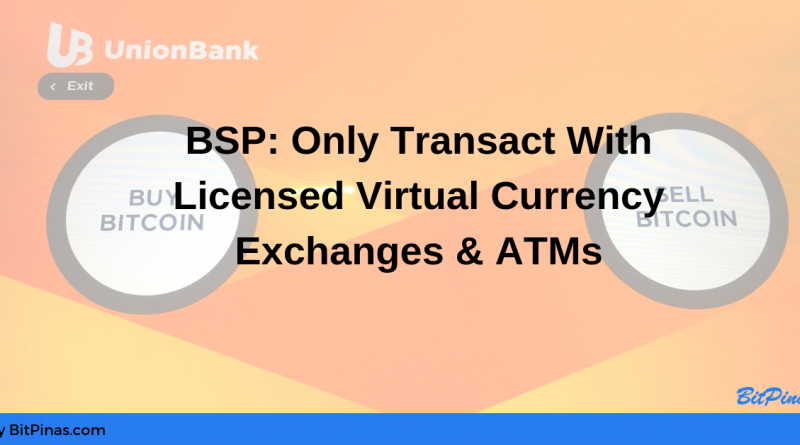 In a media release, the Bangko Sentral ng Pilipinas (BSP) advised the public against unlicensed virtual currency ATMs. According to the BSP, “operators of ATMS that allow purchase or exchange of virtual currencies like bitcoin must be registered with the BSP as VC Exchanges (VCEs). It stated further that VC ATM operators must comply with anti-money laundering and anti-terrorist financing regulations, as well as ensure adequate consumer protection and customer support.

The BSP said it recommends the public to only deal with BSP-registered virtual currency exchanges, licensed exchanges that can facilitate crypto to fiat conversions. The government agency also recommends maintaining “only a sufficient amount of virtual currency to cover transactional requirements” while at the same time reiterating that it does not endorse any type of cryptocurrency as legal tender or store of value.

Guidelines for virtual currency exchanges in the country was first released in 2017 with the BSP’s Circular 944. This circular provided detailed rules and regulations regarding the VCE registration, operations and their reporting obligations to the government.

A follow-up memorandum was issued this March 2019 regarding virtual currency ATMs (and other devices with similar functionality and capability). The memorandum stated that these ATMs are treated as virtual currency exchanges and must also be registered with the BSP.

UnionBank of the Philippines, which launched its own virtual currency ATM last February 2019 told BitPinas last month that they acquired permission from the BSP to launch such ATM.

This article first appeared on BitPinas: PH Central Bank Does Not Want You To Deal With Unlicensed Virtual Currency Exchanges & ATMS

roof repair near me

[…] Read More to that Topic: bitpinas.com/news/ph-central-bank-not-want-deal-unlicensed-virtual-currency-exchanges-atms/ […]

[…] Here you will find 12649 more Information on that Topic: bitpinas.com/news/ph-central-bank-not-want-deal-unlicensed-virtual-currency-exchanges-atms/ […]

Initial Coin Offerings of CEZA-based crypto exchanges will be blocked by CEZA by preventing PH residents from accessing their websites.

The number of virtual currency exchange applications have increased, according to the Bangko Sentral ng Pilipinas.

The Philippine Economic Zone posted earnings for Q2 2018 that’s higher than all income posted for 2017, thanks to offshore fintech and blockchain firms.